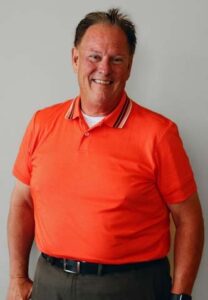 In 1983 Mark moved to the Tampa Bay area. He continued his education at
the University of South Florida where he completed studies required for
Florida Teacher Certification in Instrumental Music Education. Mark began a
full-time music ministry career, which spanned over more than three decades.
He served as Worship and Arts Director in large United Methodist Churches in Tarpon Springs, Tampa
Palms, Snellville, GA and lastly in Palm Harbor, FL, where he recently retired. While at Palm Harbor,
Mark also founded the Instrumental Music Program for Westlake Christian School, a Blue Ribbon School
of Excellence. As the Band Director there he introduced hundreds of students to the joy of instrumental
music.
Mark is the co-founder of Bones South, a trombone ensemble and rhythm section that has performed
regularly in the community. Additionally, he is an avid composer and arranger in both choral and band
music. Mark also engraves music for publication – including a couple of ‘Rounders arrangements`. His
marching arrangements for the 100th anniversary of the Gettysburg College Marching Band were
recently included in the nationally released Bullets Marching Band CD. In addition to performing with
the ‘Rounders` since the 2018 season, Mark continues to play trombone in several concert bands in our
community. When not doing music, he keeps busy as a Medicare Benefits Representative for Ultimate
Healthcare Plans, and can be found on many of the local cycling trails on the weekends. He currently
resides in Hudson, FL.


Deprecated: Function create_function() is deprecated in /home/aqqboefmxj3z/public_html/wp-content/plugins/seo-ultimate/includes/jlfunctions/arr.php on line 64