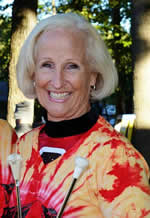 Cathy’s Crew, a baton twirling ensemble with over 400 students in the Broward County area. Her husband, Jon, joined in and became involved

as a marching band show designer and color guard choreographer with local high schools during 1980. Jon and Cathy were instrumental in the

development of the SFCGA at this time and they both became active band and auxiliary adjudicators for FBA and the local circuit.

In 1984, the Kersten family and business relocated to the Orlando area. A new twirling ensemble, The Florida Twirling Academy (FTA), was

Cathy’s new endeavor and she began judging for DCI and WGI. After five straight State NBTA Twirling Team Titles with FTA and 2

placements at USTA Nationals with her team, Cathy said goodbye to the twirling end of the activity as Color Guard started to take over as a

One Orlando camp at UCF with 49 kids then developed into 3-4 camps each summer with over 700 kids participating. We were also lucky to

Cathy is currently the Executive Director of the Florida Marching Band Championship, taking over her husband Jon’s position after he passed

away in October of 2010 of colon cancer. The family is dedicated to carrying on his legacy, hosting almost 100 Florida high school

marching bands in the Tampa/St. Petersburg area every November, with the State Championship being held in the Tropicana Field Dome.

It would be fair to say that Marching Band is my job, my life, my passion…. and after joining Second Time Arounders, it is now my social


Deprecated: Function create_function() is deprecated in /home/aqqboefmxj3z/public_html/wp-content/plugins/seo-ultimate/includes/jlfunctions/arr.php on line 64