The Band was founded in 1983. The idea came about when William (Bill) Findeison (pronounced Fin-Die Son) a music store owner, was having a conversation with Herb Melloney the Executive Director of the St. Petersburg, Florida Festival of States. Bill The Greater St. Petersburg Area Awesome Original Second Time Arounders Marching was looking for an innovative way to advertise his store during the festival. Herb was sure that a float of some kind was not the right answer for Bill. After a while the question came up, “what happens to all those kids who played a musical instrument in their high school and college bands after they graduate? Would they like a chance to march in a parade one more time?”

An advertisement was placed in the local newspaper announcing that anyone who played in a high school, college, or military band and would like to do it one more time, were asked to meet at a local high school for a rehearsal. About 60 musicians showed up along with some auxiliary to round out the group. Bill passed out the marching music, just two tunes, and held a rehearsal for two hours.  At the end of the rehearsal Bill asked that everyone pass in their music and he would have two new tunes next week.  This first group had exceeded expectations as to what the quality of the group would be. Thus, the Rounders were born and have been exceeding expectations ever since.

The ‘Rounder Band has extended its performances from just two parades, to stand up concerts and field show exhibitions. The ‘Rounder ranks have swollen from the first 60 members to over 400. The members range in age from 18 to over 80. Members have met their spouses, had children, and at times there have been three generations of a family participating in the band at the same time.

In 1994 The ‘Rounders took their very first trip to participate in the Portland Oregon Rose Festival, and since then, the band has packed their bags for appearances in the San Antonio Fiesta Celebration, the St. Patrick’s Day Festival in Dublin, Ireland in 2001, Calgary Stampede in Alberta, Canada, Washington DC for the Cherry Blossom Festival, Savannah, Georgia for their St. Patrick’s Day Celebration and  two appearances in the Macy’s Thanksgiving Day Parade, in New York City.

Over the years the ‘Rounders have been recognized for its size, the multiple generations of its members, and most importantly, the quality of the musicians.  The band only meets for about seven weeks a year, with six weeks of rehearsal and a week of performances. Then, the members go back to the daily routine of their lives, until the ‘Rounders meet again.

There are no try outs to be a member of the ‘Rounders, just prior experience and a willingness to attend the rehearsals and performances. Some ‘Rounders travel up to three and four hours each week for the opportunity to participate in the band. We love it when someone on the sidelines decides to join the group moving from passive observer to active participant, looking for the opportunity to do it all “a second time around.” 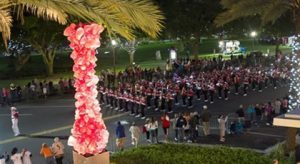 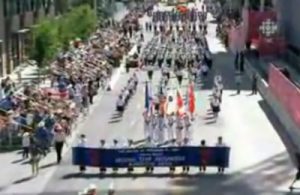